We have been busy this week. With the Kickstarter just a little over a week away things are getting fast and furious (after a fashion). I will be out of pocket all next week so that puts the pressure on us a little more.

This last week saw the creation of the Kickstarter mockup photo: 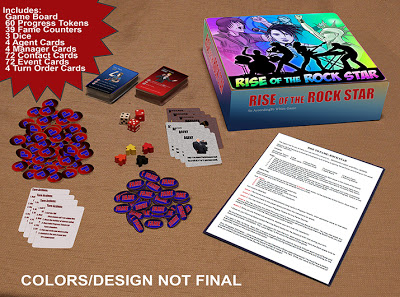 Filled to the brim with Photoshop goodness, I wanted to get something out there that would give people an idea of what we were trying to make (visually, at least).

Also on the Kickstarter front we have played some more test games and discussed aspects of the project (backer levels, project description, etc). We even got the game listed on the BoardGameGeek and got myself and Chris listed as game designers (woohoo!).

Since out last update we got Chris’ most recent VLOG up and online. Enjoy!
We also did our weekly audio show with Miguel phoning it in (literally) from the newly opened Fort Worth Coyote Drive in Movie theater. I can’t believe he beat me to it!
Comicon is only 8 days away so there is lots going on there too. Tons of Anime model kits to sell, people to see, costumes to admire, and Kickstarter business cards to hand out. This looks to be an interesting month or two ahead.