Before the change to Twitter’s
layout, I looked at the panel on the left of Twitter where it said “Trends for
You.” There wasn’t much that really applied to my interests, because I was
relatively new to Twitter. Still, getting ideas from prompts and other forms of
randomness is one of those things I do. Just seeing what was over there could
unlock some interesting thoughts, so I looked.

I found a hashtag that said
“SixWordHorrorStory” and had the simple explanation of write a horror story in
six words or less. First, it’s a writing based hashtag. Second, it might be
fun. I realized that there would be some “horror stories” that were silly,
(“Chris was out of Dr. Pepper.”) but I took it on face value that I wanted to
take this seriously. I didn’t want the Twitter police coming along and
complaining at me that I didn’t treat their hashtag with the reverence it
deserved.
Besides, on June 23, 2015, I did
a similar challenge on my own. I wanted to write as much of a scene as I could
with the fewest words possible. It was like flash fiction in a way, but where
my intention was to not try to use all 500 words. It was to try not to use any
unnecessary words. It read like this:

It wasn’t bad. The only issue is
that some still took it to be an opening to a story rather than a complete
story, but to be fair I once wrote a 20 page story and was told it was a good
opening to a story, so whatever.
This is why I was interested in
trying to write a complete horror story that was only six words long. It was
like the concept that the shortest complete sentence in the English language is
“Go.” It needed to be a complete thought. Like a Vine video that was meant to
creep people out. I didn’t go look at what others had done, because I wanted to
keep my head clear to my own ideas. 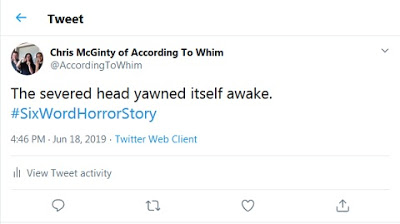 I think I did pretty good. What
else can you do with six words? And while I was on the subject, I wanted to
know exactly that. What else can you do with six words? So I clicked on the
hastag and started reading. And this is where I’m still a noob to Twitter. I
didn’t really find very many things that I would consider a horror story in the
classical sense. It was mostly silliness. The top three were: Trump gets
reelected, my phone battery is dying, and a cat worried about an empty food
dish. I’m all for satire, but I thought there would be a sprinkling of satire
in between some creative thoughts. The closest things to a horror story were
someone posting a creepy picture or gif and their six words or less was, “This
picture right here.”
I’m not really complaining. I was
just a little disappointed that I was prompted to laugh more than I was given a
chance to go, “Ooh, that’s an interesting one.”
Chris McGinty is a blogger…
#SixWordHorrorStory